Bill and Laurene Parlatore met us at Zimmerman Marine in Mathews, VA late in the afternoon on January 7th. We went over Growler’s systems and the changes made since we moved the boat in 2003.

On a good forecast we set off the next morning for South Florida where the Parlatores, and Katie their Golden Retriever, would join the boat for a long awaited winter cruise.
Zimmerman had recently installed trim tabs, a new Volvo design, that worked very well, lowering the bow and keeping the boat on proper trim level at the cruise RPM of 2100. Growler’s performance with the 350 HP John Deere was very smooth, reasonably quiet and fuel efficient at 14 GPH at 14 to 15 knots.
On January 9th the weather continued to cooperate in an unusually warm fashion, even as the winter winds kicked up open water in a most unfriendly fashion. We were snug and warm due to the Hurricane diesel heater that functioned flawlessly. We crossed all the dreaded sounds, Currituck, Albermarle and Pamlico in fast and dry fashion thanks to Growler’s design heritage and meticulous attention to detail by the crew at Zimmerman Marine.

On Thursday January 10, after leaving Dowry Creek we shot out the inlet with the tide at Beaufort, NC for a 60 mile run to Masonboro Inlet at Wrightsville Beach. This can be an exciting run if the weather turns against you, but was a delight this day due to weak high pressure over the area bringing calm conditions.
On Friday January 11 we departed Wrightsville Beach at 0700 and with offshore conditions at 20 to 25 knots of nasty southerly winds and seas running, we used the protected inside route to Georgetown, SC where we tied up at the Boat Shed Marina at 1610 hrs.
Growing tired of basic boating bailing of the lazarette, we stopped early at Charleston City Marina to replace the Tides Marine rudder shaft seal and a faulty lazarette bilge pump. One repair led to another, as these things usually evolve, and by the time we had also completed the temporary repair of a broken turbo support bracket, it was late in the day on Sunday January 13.
January 14 we departed City Marina, running inside, bound for Kilkenny Marina in Georgia.
January 15 we left Kilkenny at 0700, with 29 degrees outside and NW winds at 20 knots. We tied up at 1730 in St Augustine at Camachee Cove.
January 16, Wednesday morning we left at 0700,first light, and fetched up at dusk at the Eau Gallie Yacht Club, and walked to the nearby Publix to replenish fresh fruits, vegetables and other supplies.
Thursday January 17 found us tied up at the appointed dock in Stuart at 1330 hrs, after stopping to top the fuel tanks in Manatee Pocket. 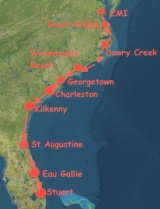 To find out more about our services please visit our web site at www.tayloryachtdelivery.com or email us at captjt@riverreach.net

Read a testimonial from the owners of ‘Growler’