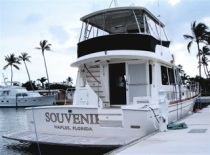 On Wednesday, March 14, 2007, we drove a rental car from Ft. Lauderdale to the Naples Yacht Club to pick up the beautiful Grand Banks Eastbay 58 ‘Souvenir’ to place her in the Palm Beach Boat Show. Wednesday afternoon we provisioned the boat, topped up the engine oil, topped up and pressurized the steering reservoir, re-secured the lock-down for the anchor well hatch, got familiar with the Raytheon H6 navigation system, and were ready to depart Thursday morning. At 0730 we left the dock headed for Marathon. By 0900 we were throttled back to 1500 RPM as the winds and seas easily surpassed the forecast conditions, and finally arrived in Marathon at 1330. The last 8 miles of Florida Bay are very shallow – around 7 feet deep, and with the 6 foot draft of the Eastbay kept our concentration on “high alert.” We put 371 Gal of diesel onboard, and pulled into our assigned slip, only to discover that the power cord would not reach with the boat facing bow in, so turned around and docked for the third time that afternoon.
Thursday morning at first light, we departed Marathon and ran up to Old Port Cove, entering at the Palm Beach Inlet. 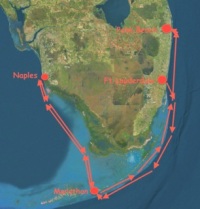 Wind and seas were still fairly boisterous on the beam and starboard quarter, enabling us to run at 1800 rpm making 24 knots. All systems functioned well, except the H6 electronics which ‘locked up’ several times and had to be rebooted.
Saturday morning we left Old Port Cove, and were safely secured in the Boat Show by 1200.

Unfortunately, ‘Souvenir’ did not sell at the show, and remained an extra month at the Hall of Fame Marina in Ft Lauderdale to take advantage of any “after boat show,” sales oppertunities. With no buyers readily available, on April 28 at 0700, we departed Ft Lauderdale for the run back to Naples. We attempted to take on fuel at the Bahia Mar Fuel Dock, but were informed “They would not be pumping any fuel until 0900,” so we fueled at Lauderdale Marina. Once clear of Port Everglades we ran at 1750 rpm – 22 knots – down to Marathon. The only casualty was the Raytheon H6 which ‘crashed’ completely, and demanded it’s Windows Startup Disc, which unfortunately wasn’t on board. Navigating at over 20 knots without a plotter is no fun. Fortunately we carry backup paper charts and 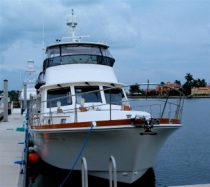 publications on every delivery trip, and continued on without incident to Marathon. We put 1000 gallons of diesel onboard and moved to our slip, this time backing in. Sunday morning at 0715 we left Marathon, and made our way carefully at 1200 rpm – across the shallow flats and out into Florida Bay, where, once again VHF weather under estimated the wind and sea conditions, it soon became too rough to run at cruising speed, and once again we were down to 1600 rpm. We arrived at Naples Yacht Club at 1300. We topped up the fuel tanks, moved to the slip, cleaned up the interior and rinsed the exterior as a cleaning crew was scheduled for Monday. A taxi took us to the Naples Airport where we picked up a rental car and returned home in Ft Lauderdale, arriving at 1800.
Delivery Summary
Total Distance: 446 NM
Average Speed: 26 Knots at 1900 RPM
Average GPH: 120
To find out more about our services please visit our website at
www.tayloryachtdelivery.com
or email us at captjt@riverreach.net