Our rental car drive from Ft Lauderdale to Bradenton was uneventful, unlike our experiences over the next few days aboard the Marlow 72′ motor yacht.
We found ‘White Lightning,’ and her proud new owners David and Helen Bruckman at Twin Dolphin Marina enjoying a ‘best wishes’ final visit from their broker Kathy Quam from Marlow Marine Sales. Our quick review of spare parts on board, indicated we needed Racor fuel elements, and raw water impellers and belts for the C18 Cats and the two generators. The boats final

destination and new home was to be Lyford Cay in the Bahamas, where parts are more expensive and sometimes difficult to find, so this area of the “prep” became more important.

We spent as much time as possible going over the boat’s systems with the new owners, some basic knots and line handling
The next morning after a spare parts delivery, we departed Bradenton for the Gulf of Mexico and then south to Venice. By the end of the day, the owners had decided that the most economical cruising speed for the trip would be 8 knots, around 1000 rpm for the 1000 HP Cats, and that they wanted to go through Marathon and NE to the Bahama Bank and over to Nassau, rather than through the Okeechobee and SE to the Bahamas. This presented several 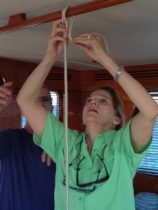 challenges. Firstly, the Okeechobee route provides a much richer teaching environment for boat handling with protected water, including the lake crossing, busy narrow channels, and 5 locks and several bridges. Secondly, the distance from Marco Island to Marathon required settled weather and a very early start to accomplish in daylight at 8 knots, with the trickiest shallow section being the final 10 miles to Marathon.
With a settled forecast we departed Venice at 0715 Saturday morning, and ran the 80 NM down to Marco Island. While navigating the Marco entrance and ICW to the Factory Bay Marina, the basic flaw in the Marathon plan became obvious – LOW TIDE!. With a draft of almost 6 feet (measured while in the slings 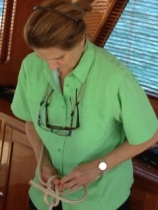 during survey), depth in the Marco channel and ICW as we made our entrance, was between 6 and 7 feet in some spots. The next morning at our early departure time, the tide would be not only be dead low, but also a minus tide. A phone call to the local Tow Boat US operator confirmed that our earliest departure time would not be until 0900, in his words, “Or I will be pulling you off the sandbar!” A certain amount of consternation followed our announcement of these facts, and the need for a revised plan for the next day. Two choices – Run the boat at cruise RPM around 17 knots and to Marathon in daylight, or go back to Ft Meyers at 8 knots and into the Okeechobee waterway. After several hours of going over times and distances David and Helen decided they would rather go back to Ft Meyers than burn the extra fuel to get to Marathon before dark. 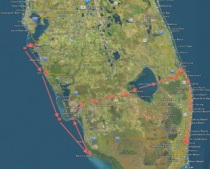 Next morning at 1000 we departed for the San Carlos Pass to Ft Meyers and the Okeechobee Waterway, and despite heavy Sunday traffic we reached Rialto Yacht Harbor at MM# 119 at 1700.
Monday was spent navigating 4 locks, crossing Lake Okeechobee, learning basic knots, going over the rules of the road and finally reaching River Forest Marina at SM# 16 just at dark at 1800.
On Tuesday, after transiting the St Lucie Lock we wound our way into Manatee Pocket for fuel, then continued on down the ICW towards Ft Lauderdale in very strong and blustery Easterly conditions offshore, making it inadvisable to run outside.
By Wednesday it was evident that David and Helen would have to wait a few days for the weather to moderate before crossing the Gulf Stream to the Bahamas. So we departed ‘White Lightning’ at Harbour Towne Marina in Ft Lauderdale having travelled 365 NM together, transited 5 locks and added 50 engine hours.
Delivery Summary
Total Distance: 365 NM
Total Running Hours: 50
Average Speed: 7.3 Knots
To find out more about our services please visit our website at www.tayloryachtdelivery.com
or email us at captjtandw@gmail.com